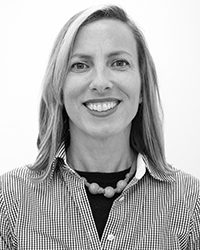 Adrienne Allebe was born in Los Angeles, CA, and has spent the majority of her life making art and teaching on the central coast of California.  The natural and human-induced transformation of the landscape has been her most constant source of inspiration.  Although highly abstracted, she sees nearly all of her works as “scapes” that reflect the terrain of the mind.  Adrienne has made art, and taught others how to make art since childhood, when she would demonstrate for her friends how to draw popular cartoon characters, such as She-Ra, during recess.  She feels lucky that her family nurtured her talent and supported her decision to be an artist and pursue a career in the arts.  She is a first generation college student.

Adrienne earned an AA from Cuesta College, a BA in Painting and minor in Art History from UCSB, and an MFA in Illustration from CSULB.  Toward the end of her studies in Santa Barbara, she became smitten with microscopic photographs of biological forms, which drove her move to Long Beach.  There she studied Biomedical Illustration while further developing her own studio practice.  The microscopic forms eventually fuelled larger conceptual interests in the idea of invisible, yet real worlds, and the nature of perception.  By the end of her graduate studies, she knew she wanted to teach.  She moved back to the Central Coast, where she has been teaching since 2005.  She currently works as an artist making the invisible visible, and began teaching in the department of Fine Arts at Allan Hancock College in Fall 2017.

Adrienne has consistently exhibited her work in Los Angeles and San Luis Obispo.  Highlights of her artistic career have included an artist residency in Thailand and a three-person show at the San Luis Obispo Museum of Art.  She is an active member of the central coast’s artistic community, participating in artist lectures, events and community outreach whenever possible. 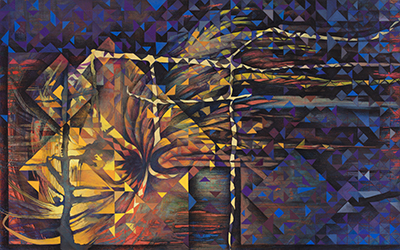 In her most recent work, Adrienne has been exploring the infinite possibilities and variations of grids, and the spiritual associations that pattern-based processes have within the history of art.  She channels artistic practices and visual forms that have been used by people throughout history to create connections to spiritual and metaphysical realms.  Her process is meditative; she slowly builds meticulous compositions by layering multiple patterns, subtle color gradations, and intense textural details with paint and colored pencil.  It is a delicate dance of control and chaos, and the peculiar and unexpected forms that emerge create excitement in the artist, and hopefully, the viewer.  She views artistic creation as a way to process what she sees, reads, thinks and feels of the world around her.

She truly believes in the healing potential of art, and that if everyone engaged in a creative outlet, be it visual art, music, dance or writing, the world would be a better place.